GREILICKVILLE — Transformation of the former coal dock into the publicly accessible Discovery Pier is smoothing the way for more passengercarrying cruise ships to visit Traverse City. The facility in December was certified as a cruise port by the U.S.

“We’re just opening for business, so we won’t see much business for two years,” said Mike Wills, the group’s chairperson.

Discover Pier’s certification will allow smaller cruise ships to tie up to shore, making it easier for passengers to disembark for day activities. Cruise ship passengers traditionally have shuttled ashore to Traverse City from vessels anchored in deep water.

Large cruise ships set to visit town this year and in 2020 still will use tenders, Will said. But smaller cruise ships — those under 250 feet long — soon will be able to tie up at Discovery Pier.

An increasing number of cruise offerings are focused on adventure, expedition or educational journeys. The 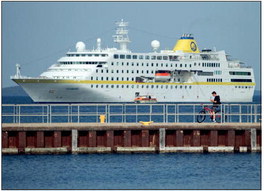 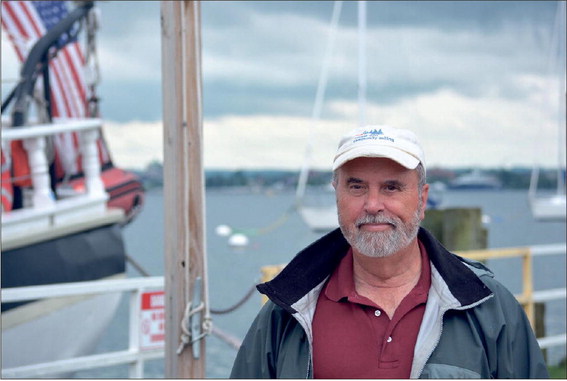 Top, Jeff Clifton of Traverse City checks out the cruise ship MS Hamburg at anchor in West Grand Traverse Bay in 2017 during a stop in Traverse City. Above, Mike Wills, chair of the Traverse City Cruise Consortium, stands on Discovery Pier near the tall ship Manitou. 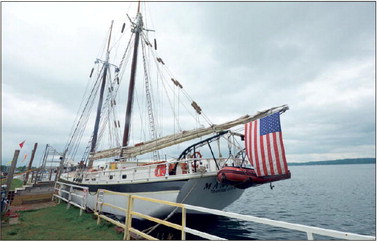 The tall ship Manitou floats next to Discovery Pier.

polar regions are growing in popularity. One ship is being built that will include a pair of 18-passenger submarines that attach to its hull. Four cruise ships are being built specifically for the Great Lakes, where access is limited by the size of the lock system in the St. Lawrence Seaway. Oceangoing mega-vessels, some of which can carry up to 6,000 passengers, don’t fit.

The eight cruise ships that operated in the Great Lakes in 2018 together represented nearly a million passenger port visits, according to the coalition. Burnett expects that, in the next decade, 12 to 15 more cruise ships will begin operating in the Great Lakes. Repeat cruise passengers are seeking fresh experiences, he said, and the time is ripe for Traverse City to promote itself.

One contributing factor in growing interest in the Great Lakes region among both cruise companies and passengers is the growing incidence of piracy in some long-time cruising regions, Burnett said. The Great Lakes offer a level of safety that is fading in parts of the world.

“There are some fabulous destinations (in the Great Lakes), and you’re one of them,” Burnett said while visiting Traverse City. “Geographically, you’ve got a beautiful location. Your waterfront is beautiful. I was marveling how few franchise brands were in your town center.”

Cruise lines generally allow passengers a limited time ashore at each stop along their route. But passengers typically spend freely during that time.

The 248-foot chartered yacht Bella Vita — which rents for between $650,000 and $738,500 per week, according to the operator’s website — docked at Discovery Pier for a short time Tuesday to make use of shore facilities. The

yacht’s keel sits 12 1/ 2 feet below water level. The water at the edge of Discovery Pier (when Lake Michigan’s water level is average — it is high this year), is 15 feet deep. But the water gets deeper farther away from the break wall.

The Bella Vita is 44 feet wide, which means its keel sits at least 22 feet from the pier, where the water is 25 feet deep, according to Wills.

A couple of passenger vessels have visited Traverse City in recent years, notably the 420-passenger MS Hamburg, operated by Plantours Cruises since 2012. Before that year, the ship visited Traverse City several seasons as the Columbus when it was operated by Hapag Lloyd cruise lines. It is scheduled to return to Grand Traverse Bay twice this year, Sept. 24 and Oct. 10. The MS Hamburg is too long — 472 feet — to dock at Discovery Pier.

“This winter we’ll dredge and pull out the old docks,” Wills said as he gestured toward the south edge of the pier.

He was standing next to the Manitou, which currently docks on the east edge of the pier. The tall ship will move to the south edge after dredging is complete. That will leave the east edge open for occasional cruise ship use, and for public fishing and sightseeing.

“Our purpose is to have this pier open to the public all the time,” said Wills.

Plans call for floating docks to be built along the edges of the earthwork pier, he said, to give visitors better water access. The protected waters between the pier and the mainland eventually will host a fleet of charter fishing boats.

A double-deck tour boat that will carry 75 or more passengers now is being refitted and, beginning summer 2020, will offer daily cruises on West Grand Traverse Bay from the Discovery Pier, Wills said.

Cruise ship companies’ interest in the Great Lakes — and in Traverse City — appears to be on the rise.

The vessel Hanseatic Inspiration, still under construction for Hapag Lloyd, is scheduled to stop in Traverse City in 2020 in both June and July. During its inaugural year, the vessel also is scheduled to cruise Western Europe and the Amazon River. The vessel is 453 feet long, carries 170 crew and up to 230 passengers, and was designed with a reinforced hull for polar expeditions. The hull was constructed in Romania, which was towed to Norway for final fitting. 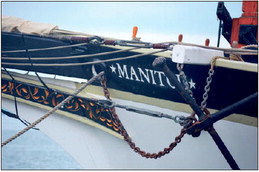 The tall ship Manitou eventually will be moved from its current docking location on the west edge of Discovery Pier to the south edge. The move will allow visiting cruise ships to tie up on the long west edge. 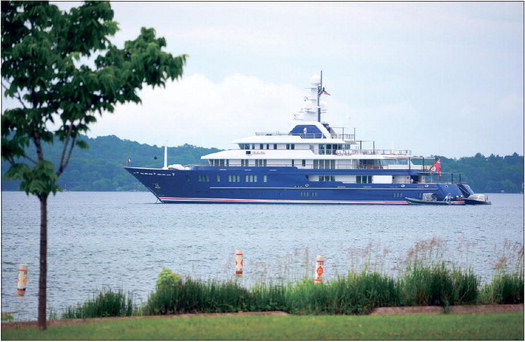 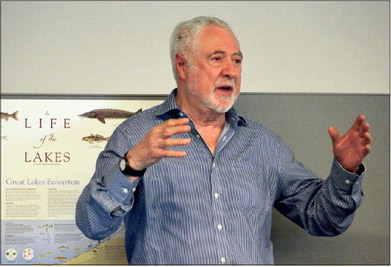 Stephen Burnett, executive director of the Great Lakes Cruising Coalition, speaks during an information session at the Discovery Center Collaborative in Greilickville.

Click here to see this page in the eEdition: